Inta Gale Carpenter, who experienced her family’s dislocation from its Latvian home, came to be a leading scholar of the Latvian diasporic experience, tracing the ways people make peace with their new surroundings and, through the artifice of artistic communication, retain something of the old as they fashion a new existence in a new environment. A child who spent her first five years as a displaced person in a United Nations refugee camp, Carpenter later became a social worker who concerned herself with the welfare of children. These two threads—the scholar who seeks to understand the experience of displaced people through their expressive culture, and the concerned citizen who helps people in distress find ways to help themselves—run throughout a remarkable career that hovers at the meeting place between the academy and the public sector. Add to this her highly social nature, which translates into an admirable role as gatherer of people and facilitator of projects, and you have the three prongs of a rich professional life anchored in the IU Folklore Institute but ranging outwards to connect with the larger university community, the city of Bloomington, the state of Indiana, and eventually, the globe, with particular involvement in various settings in the United States and in Latvia, Germany, and Brazil.

Carpenter completed her bachelor’s degree in sociology at Chatham College in 1966, and after working for two years in Colorado as a child welfare caseworker, she accompanied her husband Bruce to Bloomington, where she began her graduate studies at the world‐famous Folklore Institute. She completed her M.A. in 1975 and found employment with the Folklore Institute as assistant director of special projects, a unit concerned with public outreach and communications; in 1978, she became associate director of special projects, a position she has held continuously to the present. In 1989 Carpenter completed her doctorate in folklore; her thesis was titled Being Latvian in Exile: Folklore as Ideology. That same year she became an associate research scholar at IU, with responsibilities divided between pursuing her own research agenda and tending to the special projects of the Folklore Institute. In this demanding yet rewarding position, Carpenter has achieved notable successes, both in the academic and in the public spheres.

As a scholar, Carpenter has dedicated herself to charting the Latvian exile experience in several locations around the world. She has received numerous research grants, from the American Council of Learned Societies, the Fulbright Scholar Program, IREX, the National Endowment for the Humanities, and various IU funding sources, to examine issues associated with exile and diaspora identity formation and transmission. This research, conducted on three continents—Europe and North and South America—has resulted in one published monograph, A Latvian Storyteller: The Repertoire of Janis Plavnieks (Arno Press, 1980), plus a series of insightful articles and book essays, published in the U.S., Latvia, and Estonia. Carpenter was elected to serve as president of the Association for the Advancement of Baltic Studies (2004–2006), and she serves as advisory editor for the Journal of Baltic Studies.

Carpenter has been equally successful and productive as an activist scholar concerned with issues of social justice. She has nurtured a vision that scholarship can and should be conjoined with social action. This vision propelled her to advocate for a public outreach dimension to the Folklore Institute, and Carpenter became a nationally recognized force for integrating academic training and research with efforts to understand and address problems affecting the individuals and communities studied. In the mid‐1990s she founded at IU the Activist Pedagogy Group, which served as an incubator for a number of socially‐engaged activist projects. With funding from the Indiana Arts Commission and the National Endowment for the Arts (NEA), Carpenter founded in 1999, as a branch of the Folklore Department (now the Department of Folklore and Ethnomusicology), a public folklore program named Traditional Arts Indiana (TAI), with a mission to document vernacular forms of culture throughout the state of Indiana. She also directed two field schools in Bloomington, in 2000 and 2001, in partnership with the American Folklife Center at the Library of Congress, which sought to involve community members in documenting their culture even as it trained students in the art of collaborative ethnographic research. During a four‐year period, Carpenter taught a course titled Field Seminar in Cultural Documentation, opening an arena of learning and cooperation that connects IU students with at‐risk Bloomington youth and with residents of Bloomington’s federal housing neighborhood. These collaborations produced in 2007 a substantial grant from the NEA to build a local public arts project. Carpenter has been a fervent advocate and inspiring practitioner of service learning education at IU.

In some ways, all these paths come together in the significant activities Carpenter has undertaken with special projects of the Folklore Institute. From 1975 to 1977 she managed the ground‐breaking Northwest Indiana Urban Folklore Project, known as the Gary Project, directed by Richard M. Dorson. She is associate editor of the influential Handbook of American Folklore (Indiana University Press, 1983). A project that involved observing the Smithsonian Festival of American Folklife led to publication of the important resource, co‐ authored by Carpenter, Reflections on the Folklife Festival: An Ethnography of Participant Experience (Special Publications of the Folklore Institute, 1992). Carpenter directed two excellent documentary videos, Joy Unspeakable (1980) and The Classics Come Home: The Auburn‐Cord‐Duesenberg Festival (1983). 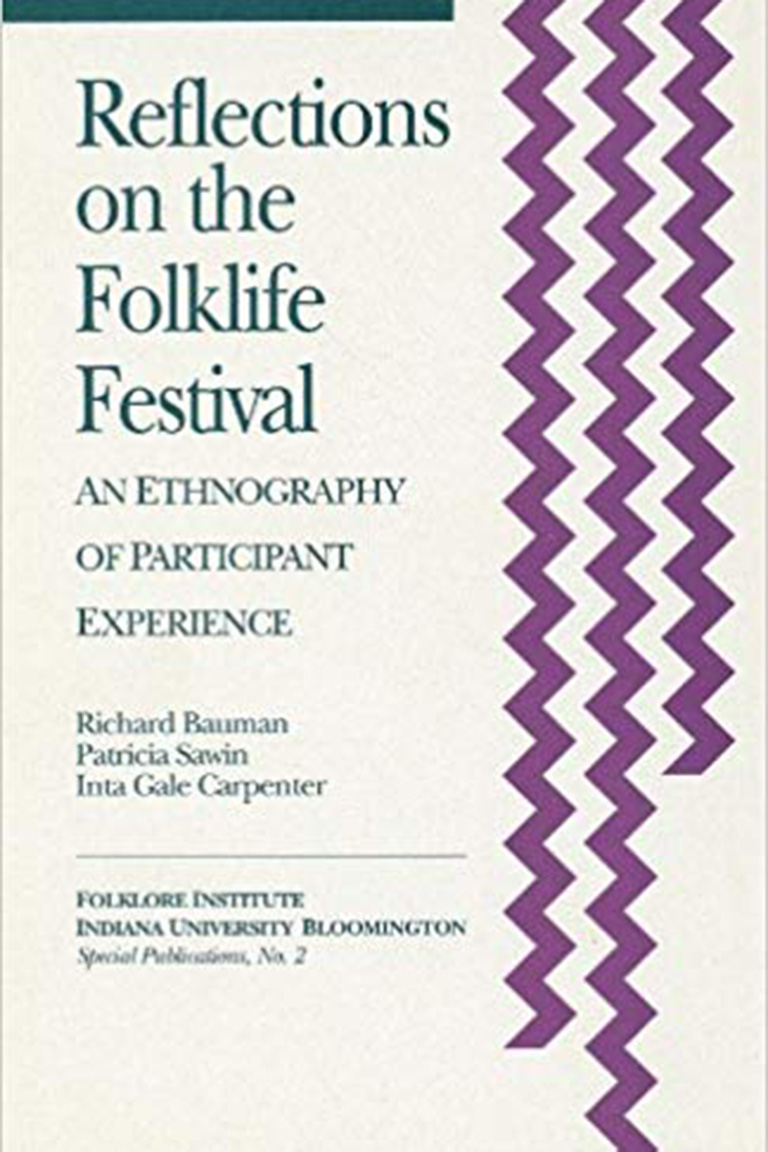 Reflections on the Folklife Festival

An Ethnography of Participant Experience